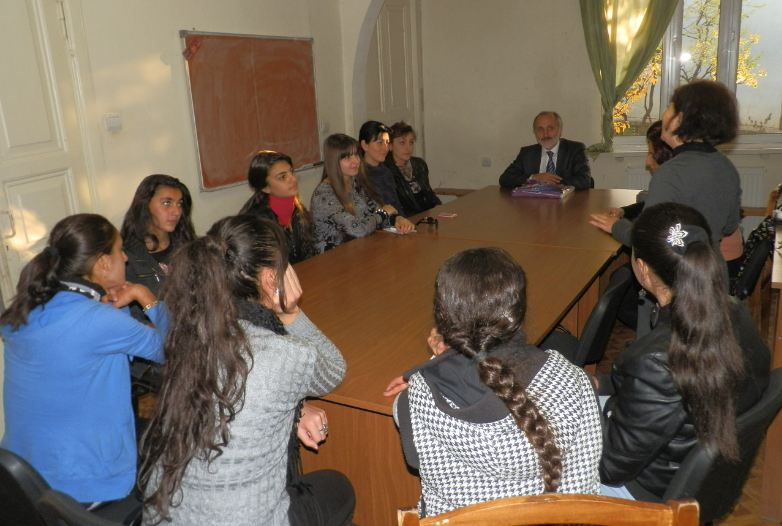 On October 30, the Armenian Youth Educational and Cultural Center of Akhaltskha held an event dedicated to the 60th anniversary of President of the Vahram Gaifetchyan Union of Creators, educator, intellectual Alexander Igitkhanyan.

During the event, the Center’s choir led by Heghine Manasyan performed several Armenian folk songs and received many poems in honor of Alexander Igitkhanyan.

Asya Vantsyan, who is one of the talented members of the Center, read her poem dedicated to Alexander.

Alexander Igitkhanyan expressed his deep gratitude to the Armenian Youth Educational and Cultural Center of Akhaltskha for organizing the event and donated the album of great painter Vahram Gaifetchyan, as well as booklets and his Union’s flyers to the Center’s library. Igitkhanyan also promised to visit the Center at least once a month and give lectures at the Center’s art club.

Spiritual father of Akhaltskha, Father Hakob expressed gratitude to the Center for organizing the beautiful event and added that the two structures must always help each other develop.

In the end, on behalf of the Center, Eduard Ayvazyan expressed gratitude to Alexander for his career and mentioned that the Vahram Gaifetchyan Union of Creators, which was established two-and-a-half years ago, complemented the Center and took a different and important path that helped establish very close relations between the two organizations.

The event ended with a reception.
Popular