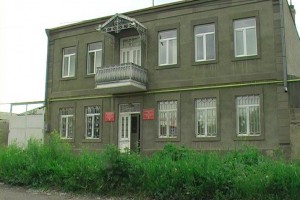 Since the very first day of its inception on December 5, 2007, the doors of the Youth Center of Akhalkalak have always been open for hundreds of Armenian children of Javakhk who are members of 23 cultural and educational clubs of the YCA. The Armenian, Georgian, Russian and English language courses and computer lessons are in very high demand.

For the past three years, Russia-based benefactor, candidate of physical and mathematical sciences Samvel Margaryan has been sponsoring a training program for university applicants to take exams for 9 different subjects. The goal of the training program is to help needy and smart children to train for free in order to apply to universities in Georgia and Armenia.

The goal of the Youth Center is to help children use their free time wisely and provide them with the right education.

Lessons are free for all members of the clubs. The teachers are mainly young people and are devoted to their jobs. They not only organize, but also participate in different kinds of events. Distinguished teachers Rstakyan, Tadevosyan and Chechelyan share their skills and experience and secrets of teaching with the young teachers. As a result, in the past seven years, the YouthCenter has become a “smithy” for extracurricular activities in Javakhk.

The Center’s educational programs are coordinated by Arpi Mirakyan. The Youth Center of Akhalkalak is a cultural-educational institution and is not politically affiliated.

By visiting the Center, more than 300 Armenian children from the city and villages of the region are taken off the streets and do good deeds. After all, children learn the worst things from the streets. The parents bring their children to the Center and enroll them in the clubs where learning is not an obligation, but a necessity. But the cultural-educational center also faces problems. The class hours aren’t enough, and the school lacks classrooms, computers and methodological books. The dance groups need a state-of-the-art dance hall. In the past couple of years, ARS Georgia has been holding the creative essay and Armenian History contests here.

Minister of Education and Science of the Republic of Armenia Armen Ashotyan, deputies of the National Assembly, as well as Diaspora Armenian and Javakhk-Armenian benefactors and public figures have visited the Center on different occasions.

The Center has a tradition of providing the young generation with an Armenian education and holds a series of events devoted to Armenian history every April. Ahead of the 100th anniversary of the Armenian Genocide, the members of YCA participate in the Zori Zoryan Youth Union’s march with torches and mark April 24th in a special way. The Center organizes the visit to the cross-stone placed in the yard of Holy Cross Church of Akhalkalak, after which the gathered participate in a liturgy dedicated to the memory of the victims of the Armenian Genocide. During the other days, the Center organizes lectures, film screenings, performances and more. This is how the Center takes a glance at the pages of the tragedy of the Armenian people with the purpose of helping provide the young generation with an Armenian upbringing, keeping the memories of the past alive in teens and youth and educating a generation of Armenians who will be demanding.

At the YCA, we attach importance to the centuries-old tradition passed on by our forefathers to preserve and deepen the centuries-old friendship between Georgians and Armenians. For instance, on Feb. 21, we celebrate Armenian Language Day, and on Apr. 14, we celebrate Deda Enan Day. We also mourn the loss of those who died for Georgia’s liberty on Apr. 9 and pay tribute to the victims of the Armenian Genocide on April 24. On May 26 and 28, we rejoice together on the festive holidays.

The Center is in close collaboration with the Vicariate of the Prelacy of Samtskhe-Javakhk. Our teachers and the students in the higher grades participate in religious events, the liturgies served at the Holy Cross Church, and the Center’s events start with the Lord’s Prayer and opening remarks by the priest. We’ll continue to support the spiritual reawakening of Javakhk.

The Youth Center has traditional events such as “Language Day”, “Golden Autumn”, “Month-Long Women’s Celebration”, “YCA Day” and “Three Celebrations”, and we celebrate almost all the national and religious holidays. In the summer, Diaspora Armenian youth help organize the Javakhk Camp, which provides more than 100 children with the opportunity to spend their vacation.

The people of Javakhk love the arts. They like to sing, dance and have a good time. That’s why there is a high demand for dance groups. Dance instructor Naslet Keyanr teaches more than 100 boys and girls the delicacies of Armenian dance and reveals their abilities. The major objective of the dance, sewing, embroidering and painting clubs is to instill in children love for the arts and form in them a taste of aesthetics.

We believe in the future of Javakhk.