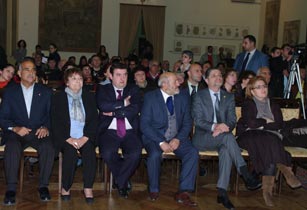 An exhibition dedicated to the 150th jubilee of painter Vardges Surenyants (1860-1921) opened today in the National Art Gallery of Armenia.

"This exhibition comes first in the list of the state committee-approved events dedicated to the Vardges Surenyants' 150th jubilee," the prime minister said, stressing the role of the world-renowned artist's cultural heritage.

Getting better familiarized with Surenyants' art, Tigran Sargsyan had been surprised to know that the great artist had only 1 exhibition while alive.

"It came to me as a surprise to know that Surenyants had only one individual exhibition which opened in 1901 in Baku. So our exhibition is an exclusive event," he said.

The Scientific Deputy Director of the gallery, Hasmik Harutyunyan, spoke of Surenyants' talent as a graphic painter.

"He was a theatrical painter, architect, translator and a literary critic. He was an entire universe," she said, adding that the painter had never succumbed to the influence of times and managed to preserve his identity.