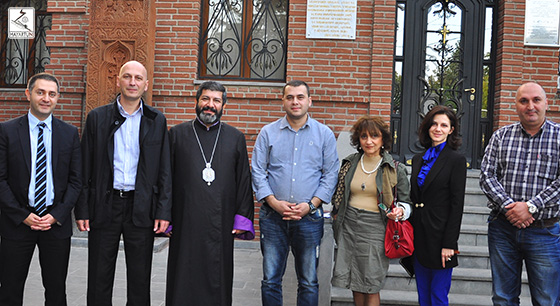 On October 14, 2014 the President of the Agency of Religious Affairs of Georgia Zaza Vashakhmadze and members of his staff had a meeting with the Primate of the Armenian Diocese in Georgia

Primate of the Diocese of the Armenian Apostolic Church in Georgia, His Grace Bishop St. Vazgen Mirzakhanyan expressed his contentment on their visit. The Primate congratulated the guests on the day of Svetitskhovloba, and wished them Godly and profitable work.

The Primate expressed his readiness to cooperate with the Agency for the sake of peaceful and united activities of religious communities in Georgia.

In his turn, the head of the State Agency of Religious Affairs of Georgia Zaza Vashakhmadze informed the Primate that questions raised are always considered by the Agency, and they make every effort to preserve cultural and historical heritage and to provide material support to religious communities in Georgia.