The power of the people of Akhaltskha 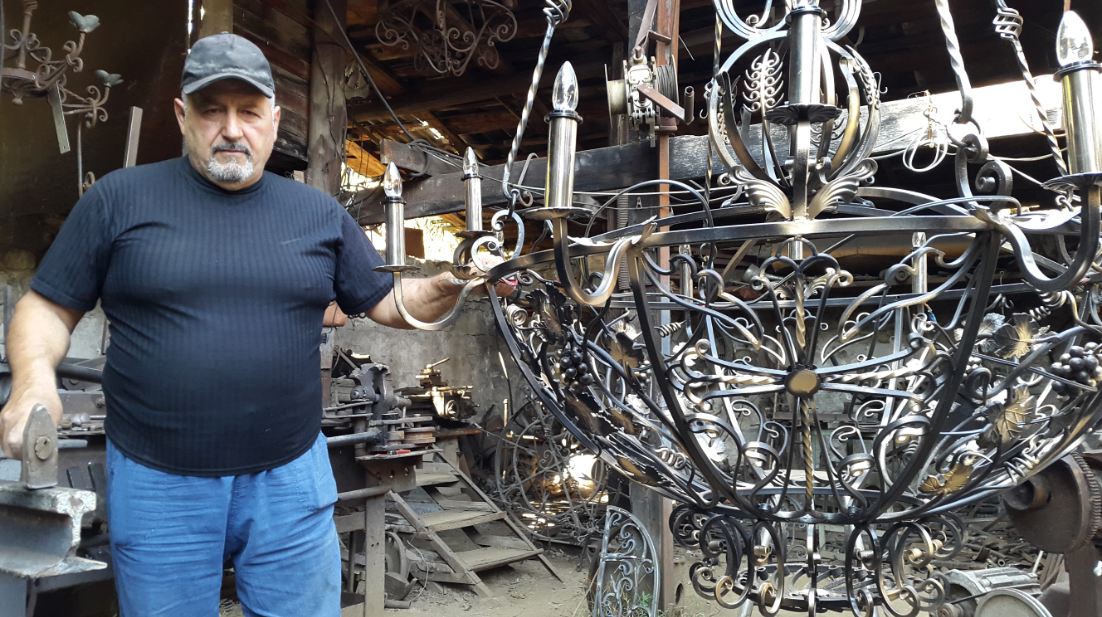 Akhaltskha.Net’s interview with Gevorg Petrosyan, who is a famous craftsman from Akhaltskha and was an active public figure in the 1990s.

Akhaltskha.net: Mr. Petrosyan, you have done and still do a lot with your beautiful craftsmanship and try to preserve the works of craftsmen in Akhaltskha. After seeing these wonderful works, the first question that comes to a person’s mind is how you learned this marvelous craft.

Gevorg Petrosyan: Akhaltskha has been known as a city of arts and crafts since ancient times. Craftsmanship, including the work of smithies has always been more developed in this city than in other cities of Georgia. Akhaltskha even used to have a street that was like a full hall of studios that was called “Damarchanots” or “Damarchineri Maila”. When we would come home from school, we would go and stand near those craftsmen and learn something from them. These days Akhaltskha is in quite poor conditions, and we’re trying to do whatever we can to maintain all that existed in Akhaltskha and transmit the knowledge to the youth until the time comes when Akhaltskha has many craftsmen once again.

Akhaltskha.net: Perhaps you have also learned something from your ancestors. For instance, you have learned from your uncle and grandfather who were also craftsmen and were good professionals.

G. P.: My uncle and grandfather were known for making heaters placed on walls (“Pechnik”). As I said, I learned how to become a craftsman from the craftsmen of the city. However, what helped me become a craftsman was the fact that my uncle and grandfather were craftsmen. There is something in common between various crafts. Today, everything is machinated, and this has a negative impact on crafts, but handmade items are totally different and must not be replaced with other things.

Akhaltskha.net: You have made many doors and candleholders for the churches in Akhaltskha, Akhalkalak and in our region in general. It would be interesting for our readers to know where the torch in this picture is located. Is it for an Armenian church in the village, or in the city?

G. P.: True, we have made doors, candleholders and other necessary tools for Armenian churches in Akhaltskha and the Samtskhe-Javakhk region in general. The craftsmen of Akhaltskha and I came together and created a very beautiful door for the Holy Cross Armenian Church of Akhalkalak. We’re doing everything we can to show that there are still good craftsmen in Akhaltskha who have partially restored all that has always existed in Akhaltskha. It’s safe to say that the Church is what helps us keep doing what we do. Their orders provide us with the opportunity to work a little on the style that is closer to our hearts. What I want to say is that the orders for the church are completely different from ordinary orders. We have also made the doors of the St. Gregory the Illuminator Church of Akhaltskha.

We made this torch for the church of Sulda. We’ve also made the candleholders for the St. Nshan Church of Akhaltskha. Unfortunately, we don’t have the opportunity to do more for the St. Nshan Church now because after the famous events that took place in the 1990s, we were promised that the two Catholicoses would solve the issue, in spite of the fact that there is no issue to solve. The church was built by our ancestors, but the issue remains unsolved to this day.

Akhaltskha.net: How interested are youth in craftsmanship and in crafts in general?

G. P.: The youth are interesting, but the conditions are poor. At this moment, we don’t have a studio where several craftsmen could do more and always work together. This creates quite a lot of difficulties. Of course, the youth learn some things from us, but due to the difficult social and economic conditions, they’re compelled to leave for abroad. This is a common problem, and it doesn’t only concern this sphere. However, in spite of all the difficulties, we try to maintain the good reputation of the city. We try to make sure everyone knows that Akhaltskha has been and still is a city with good craftsmen.