The concert of “Nerses the Shnorhali” choir in Akhaltskha 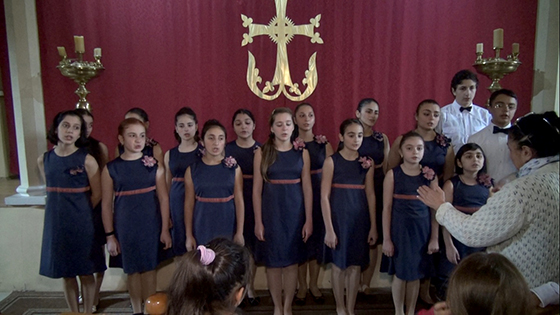 On October 26, 2014 “Nerses the Shnorhali” youth ensemble of “Hayartun” center at the Armenian Diocese in Georgia gave a concert in Akhaltskha. The event was devoted to “Tbilisoba” holiday. The ensemble created a holiday atmosphere in the local St. Gregory the Illuminator church, where the concert was intended to take place. Thanks to the efforts of spiritual representatives of the church and the community members, the problem of lightening was solved and the Spiritual Fathers made their blessings. Then spiritual and national songs were performed by Nerses the Shnorhali ensemble under the church arches. The audience warmly applauded to the concert of the ensemble, headed by the Conductor Maria Abulyan and piano player Karen Mirzoyan.

Later “Nerses the Shnorhali” choir of the “Hayartun” center visited the youth center in Akhaltskha. The coordinator of the Youth center Eduard Ayvazyan greeted the guests. He highlighted the importance of introducing the Armenian localities to the youth. The director of the cultural department and the leader of the “Hayartun” Center at the Armenian Diocese in Georgia Levon Chidilyan called on to encourage the cooperation between the centers, which would contribute to the establishment of friendship and mutual collaboration among the youth.

The latter presented textbooks on the History of Armenian Apostolic Church and a few training CDs to the youth center in Akhaltskha. The youth of both centers made a nice performance.

In Armenian localities the guests also paid a visit to Armenian spiritual monument St. Nshan church. The sacred temple made an indelible impression on the young people. They listened to the stories of spiritual fathers about the church, and gladly performed spiritual songs.

The members of “Nerses the Shnorhali” ensemble visited Vahram Gayfejyan Creative Union. The children watched the exhibits, and the President of the Union Alexander Iguitkhanyan informed them about Vahram Gayfejyan as a creative personality, as well as about the activities of the union and the center.

The directorate of the educational, cultural and youth center “Hayartun” thanks the Ministry of Culture of RA for the support provided. The center expresses its appreciation to the senior priest at Akhaltskha St. Gregory the Illuminator church St. Yeghishe Harutyunyan, hieromonk St. Hakob Sahakyan, the coordinator of the youth center Eduard Ayvazyan and the community authorities for the warm welcome. The center hopes that such meetings would be mutual and continuous. It would open new horizons of project realization for both centers.