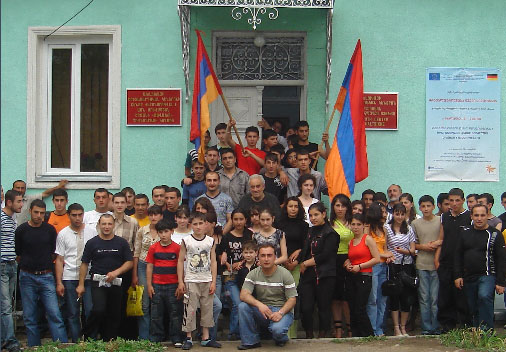 From 25 September, 2006 Armenian Youth Centre of Akhaltskha began its functioning.

The office was renovated and opened by the USA West Coast Javakhk fund. After the collapse of the Sovet Union, it has been the only ArmenianOrganization in Akhaltskha, which extended its functioning in educational sphere.

Proceeding from the situation of the given period, the organization also began partially dealing with the questions of the Armenian population rights of this area.

In a short period of time the Centre has reached enough success as a result of its staff”s hard work and devotion, and became popular in the city.

The measures connected with the Great Genocide of 23-24 April and Victory Day in May got more great sweep owing to the newly created organization.

In a short time the youth Centre members started to take part in different meetings and measures inside the city or out of it, that were held by the local and international organizations. Thanks to the presence of the centre the problems of population living in the area of Samtskhe – Javakheti were always brought forward on these meeting and measures.

After the familiar arrest of 22 January in 2009, the centre took a decision to choose a new executive – Veronika Hambaryan. After that the organization was renamed as the Akhaltskha Armenian Youth Cultural and Educational Centre. So, the phrase " cultural and educational” entered in the title of the centre.

Nowadays the functions of the centre are various. Its work helps for the development of the Armenian youth mental potential and cultural self- suffering preservation and consolidation.

There are different classes in the centre. Such as Armenian language, Georgian language, English, Armenian History, folk dances and songs, drum, chess, informatics, radio equipment, painting, handicraft and design. With all this " Zori Zoryan Youth Union” Akhaltskha branch is functioning here too. There is no age limit. The youngest pupil is four years old and the oldest one is forty-five.

The Akhaltskha Armenian Youth Cultural and Educational Centre actively cooperates with the Armenian Orthodox church and the pupils of the centre actively take part in every ritual ceremonies and measures organized by the church. In the Centre the youth also study spirituals that are performed during the liturgy.In 2008- 2009 pilgrimages to the Armenian sanctuaries were organized thanks to the close relationship of the church and Centre. And around 30 adults of the Centre were involved in these pilgrimages.

On August 1 in 2009 the Armenian great artist – Vardges Surenyant’s memorial tablet was opened in Akhaltskha, which was followed by a great concert, where different popular singers from Armenia, Georgia and other countries participated. The Akhaltskha Armenian Youth Cultural and Educational Centre also participated in it. The audience was admired by the performance of song and dance ensemble "Gohanamk.”

The Centre always participated with folk songs and dances in every measure of Samtskhe- Javakhk, that has positive influence on an isolated region.

To make the Centre functions more productive, it is necessary:

1. To widen the office space

2. To restore the office basement

3. To solve the heating problem

4. To update the computers and to provide high speed internet

5. To provide photo and video equipments

If the upper mentioned problems are solved, the Centre functioning will be more productive and great power will be transmitted to the Armenian saving mission of the organization.