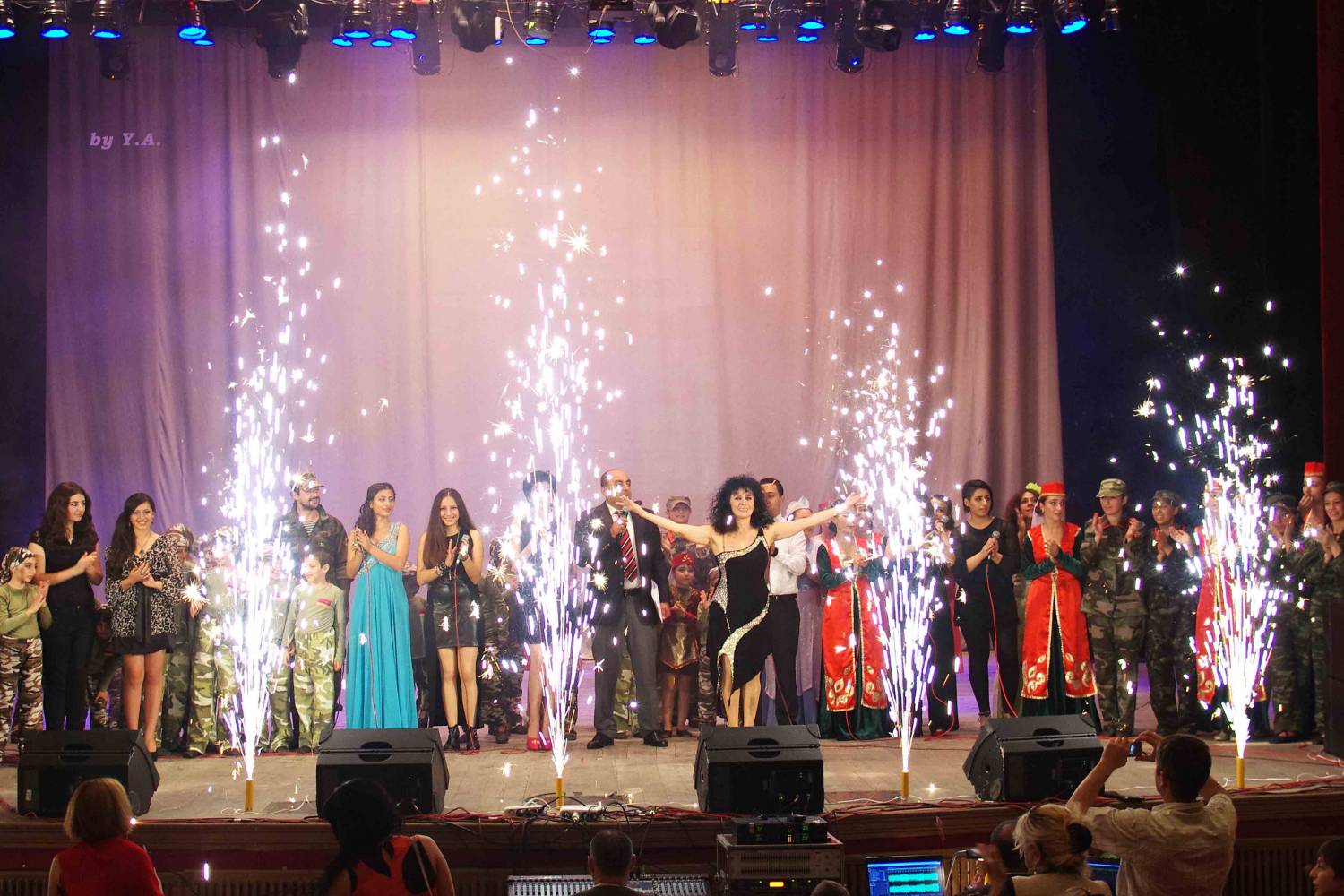 On the 21st of September, 2013 at Tbilisi Art Hall, the 22nd Anniversary of Independence of the Republic of Armenia and the 10th Anniversary of dance ensemble "Jeyran” of the Diocese of the Armenian Apostolic Church in Georgia were solemnly celebrated. The anniversary event was organized by EducationalCultural Youth Center "Hayartun" of the Diocese ofthe Armenian ApostolicOrthodoxChurch in Georgia, with the support of RA Ministry of Culture and in cooperation with RA Embassy to Georgia. The AmbassadorExtraordinary and Plenipotentiary of Armenia to Georgia Hovhannes Manoukian, the Primate of the Diocese of the Armenian Apostolic Church in Georgia, His Grace Bishop Vazgen Mirzakhanyan, Advisor to the President of Georgia,the editor of "Vrastan" ("Georgia") Van Baiburtian, diplomats, the clergy, the leaders of Armenianorganizations in Tbilisi andpublic representatives attended the anniversary event.

The hero of the day - dance ensemble "Jeyran” (the choreographer and artistic director - Svetlana Yeritsyan), opened the celebration, dedicated to the independence of Armenia, with a dance entitled "Kapuyt yeraz” ("Blue Dream”), symbolically representing freedom as the materialization of a centuries-old dream of the Armenian people.

Levon Chidilyan, responsible for the cultural department at the Diocese of the Armenian Apostolic Church in Georgia and coordinator of the "Hayartun” Center, opened the event, he announced high appreciation of the Primate of the Diocese of the Armenian Apostolic Church in Georgia and expressed high gratitude of the "Hayartun” Center to the the members of the Board of Trustees, benefactors Samvel Aghekian and Ashot Baloyan, for the support provided in the artistic part of the event, and for the patronage of Ashot Baloyan in providing the ensemble with the Georgian dance costumes. After that the host of the event presented against the background of documentary footage the path of the dance ensemble "Jeyran” from the time of its formation to the present day.

Dance ensemble "Jeyran” and newly formed children ensemble "Mush” performed one after the other compositions, national and Georgian dances, and received warm reception and tumultuous applause of the audience for their skillful performance. The singers of the "Hayartun” Center at the Diocese of the Armenian Apostolic Church in Georgia - Anna Poghosova, Ani Ghushchyan, Diana Movsisyan, Emma Poghosova, Nadya Zakhanyan, Genrikh Petrosyan, Nina Karapetyan-Gevorkova and Hovhannes Shakhnazaryan skillfully performed during the concert different songs, dedicated to Armenia and the Armenian people. The 12th class student of Tbilisi School № 104 Liza Torosyan recited a poem by Anahit Bostanjyan, dedicated to dance ensemble "Jeyran” and its artistic director Svetlana Yeritsyan.

At the end of the event the Head of the Diocese of the Armenian Apostolic Church in Georgia, His Grace Bishop Vazgen Mirzakhanyan blessed the audience and congratulated everyone on the 22nd Anniversary of Independence of the Republic of Armenia. He touched upon the career of the talented dancer and highly proficient choreographer Svetlana Yeritsyan, the Head of the Diocese named the activities of the Chevalier of the Georgian Order of Honor and "Komitas” gold medal winner, Svetlana Yeritsyan, the mission to introduce to the world through dance the centuries-old history of the Armenian people and to educate esthetically the Armenian boys and girls, after that he presented the ensemble the painting of Tbilisi Armenian Artist Tengiz Mikoyants. His Grace highly praised the work conducted by the organizers of the event – the coordinator of the "Hayartun” Center Levon Chidilyan, the artistic director Pavel Oganezov, responsible for the technical service department Valera Badalyan, and named it the service for the good of the nation.

The group performance by all participants of Albert Abgaryan song "Depi Apahov Hayastan” finished the concert. The event ended with a holiday cake and fireworks.
Popular