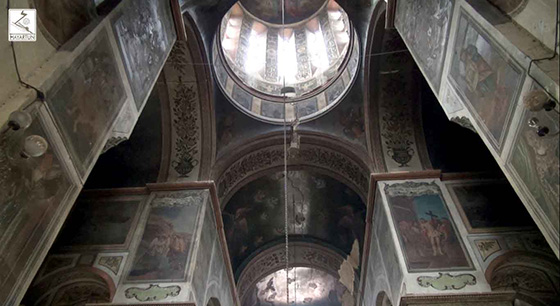 Restoration works of the 15th century St. Norashen church started on October 2 of the current year under the blessing of the Primate at Armenian Diocese in Georgia.

Back in January 2013 during Georgia Prime Minister Bidzina Ivanishvili’s visit to Armenia, His Holiness Karekin II, Catholicos of All Armenians raised the question of returning the churches in the territory of Georgia that were confiscated during the Soviet era, to the Diocese. Prime Minister Ivanishvili’s answer was his initiative to restore the churches in danger before making a decision on their affiliation. The Prime Minister expressed his readiness to finance the restoration works from his “Qartu” foundation.

A working group, which included the Ministry of Culture of Georgia and the Agency of Cultural Heritage Preservation of Georgia, was formed. The group would be responsible for the arrangement of works and project development.

During the coming year the foundation of the church will be strengthened, then there will be works on restoration of the exterior and entire parameters. According to Bidzina Ivanishvili’s initiative, the restoration works are financed by the foundation of preservation of historical monuments “Qartu”. The restoration project of the temple was worked out by the architectural company “Engineering Idea”, and the construction company “Aba Jgupi” performs the restoration on the basis of this project. Patriarchate of Georgia and the Armenian Diocese in Georgia deliberately follow the works of project development and construction. And the supervision of works is fulfilled by the Agency of Cultural Heritage at the Ministry of Culture of Georgia. The restoration works will continue three years on.

The question of returning Armenian churches to the Armenian Diocese in Georgia is still being negotiated in the Parliament. This problem has been urgent since regaining of independence and is being delayed for already 20 years.