Robert Kandakhsazov’s Commemoration Exhibition In Tbilisi
On November 22 the exhibition dedicated to the artist of Tbilisi Robert Kandakhsazov’s commemoration was opened. At the exhibition  the pictures from the Master’s  personal collection were mainly presented. "The event will last for three days,”- declares  "hayastan.com”
Robert  Abgar Kandakhsazov was born in 1937, in Tbilisi, to a doctor’s family. As soon as he graduated from school, he entered Tbilisi
Academy of Arts, painting faculty. After graduating  from the Academy the Artist took a decision not to exhibit his works for the reason of protecting them from ideology and conjuncture. They have been exhibited only since 1964.
Moreover, he was engaged in  design, book   graphic,  scenography. He became a member of Artist Union in 1968. The honored  Artist of Georgia also attended international meetings in Russsia , Armenia, Georgia, Great Britain, USA, France, Belgium, Holland, Israel, Austria.
Robert  Kandakhsazov  died in 2010 in Moscow. 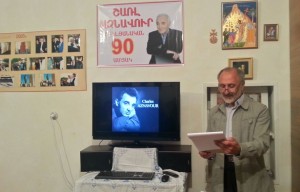