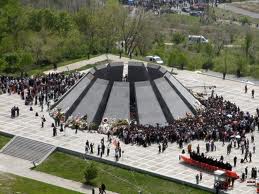 On 24 April 2012, the day of commemoration of the 97th Anniversary of the Armenian Genocide, a Member of the Georgian Parliament, Mr. Jondi Baghaturia while making a statement in the Parliament, touched upon the most painful question for the Georgian citizens of Armenian origin – the subject of the Armenian Genocide. This statement caused crude and inappropriate reaction of another Georgian MP, the majority deputy of Marneuli district, Mr. Azer Suleymanov.

Mr. Suleymanov’s incoherent reaction was abusive not only because it considered the fact of the Armenian Genocide in a negative context, but due to the public racist statements made by the MP concerning the Armenian nation. Even though the paragraph 4 article 52 of the Constitution of Georgia states that "A member of the Parliament shall not be proceeded on the account of the ideas and opinions expressed by him/her in and outside the Parliament while performing his/her duties”, the public racist statements should not be considered within the context of parliamentarians’ liberty of making statements. Such deeds must be seen within the context of the article 1421 of Georgian Criminal Code which states that "racial discrimination, i.e. the action committed to incite to national or racial enmity or distraction, humiliate the national respect and dignity… shall be punishable by imprisonment for up to three years”.
The same day, the Public Defender (Ombudsman) of Georgia released a special statement concerning that fact in which he mentioned "Unfortunately Azer Suleymanov highlighted ethnic origin within a humiliating and insulting context, thus he tried to discredit his opponent. It is outrageous that the author of these statements is a Member of Parliament, which in my opinion in such a case has special responsibility”.

Moreover, Mr. Suleymanov, as a member of the United National Movement political party violated also the paragraph 8 of the article 3 of the Party’s Charter, which prohibits to its members the commission of unlawful acts or acts which humiliate the name and dignity of the Party. It has to be mentioned that the public racist statements of Mr. Suleymanov against the Armenian nation have significantly deteriorated the image of the United National Movement in Georgia, as well as abroad.