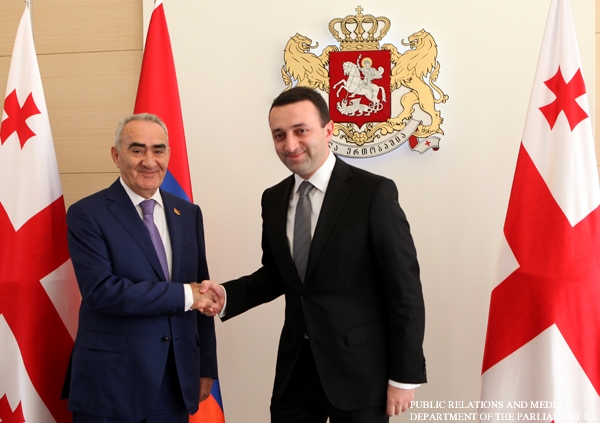 In the morning of October 7 the RA NA Speaker Galust Sahakyan laid a wreath in the Square of the Heroes Deceased for the territorial integrity of Georgia. Then the delegation set off for the Residence of President of Georgia.

During the meeting with the President of Georgia Giorgi Margvelashvili numerous issues regarding the inter-state cooperation in the cultural, political and economic spheres were discussed. The RA National Assembly Speaker Galust Sahakyan has expressed his concern over the armament race in the region, which presents danger for all the countries. “The huge amount of money that Azerbaijan and Turkey spend for getting assault weapon, can be directed to the establishment of stability and forming an atmosphere of confidence, involving all the countries of the region,” Galust Sahakyan has noted.

Then the issues relating to the spheres of inter-state cooperation have also been discussed with the Prime Minister of Georgia Irakli Garibashvili. In the course of the meeting with the Prime Minister the RA NA Speaker Galust Sahakyan has noted with satisfaction that distinct directions have been formed during the recent years in the sphere of trade-economic cooperation. They include the spheres of transport and energy, tourism and agriculture. Galust Sahakyan has highlighted the proper activity of the Verin/Upper Lars border checkpoint.

Responding to the scores of Georgian Armenians’ requests the RA NA Speaker Galust Sahakyan addressed the Prime Minister of Georgia: “I would like to draw your attention to easing the provision of the right to permanent residence for the citizens residing in Georgia, who going to work abroad, have received citizenship of other countries and to ask your support on this occasion. As a consequence of legislative amendments in Georgia they have appeared in hard situation, having no opportunity to reside with their families.”

Welcoming the members of the delegation in the parliament the Prime Minister of Georgia Irakli Garibashvili has documented that the official visit of the RA NA Delegation to Georgia is the evidence of friendship and brotherhood of the two countries. Touching upon the legislative amendments regarding the visa regime, the Prime Minister of Georgia has informed those present: “We have received a working plan concerning the signing of Association Agreement. The new regulations of the visa regime are conditioned by that, and stemming from it we had to make certain amendment to the law. The state is reserved the right to establish privileges towards some countries or the citizens. That issue would be certainly solved,” the Prime Minister assured.

The delegation headed by the RA National Assembly Speaker Galust Sahakyan also visited the Embassy of the Republic of Armenia to Georgia, after which the members of the delegation accompanied by the RA Extraordinary and Plenipotentiary Ambassador of the RA to Georgia Yuri Vardanyan have been to Komitas Pantheon of Tbilisi and have laid flowers at the tombs of the great Armenian artists and writers.