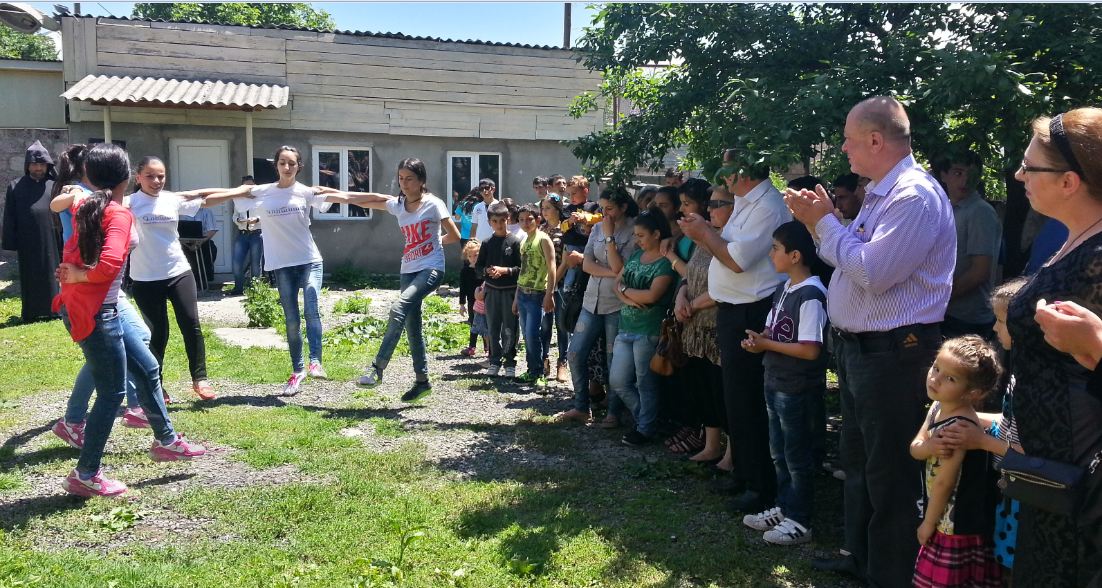 On May 29, Armenians of Akhaltsikhe gathered at Saint Grigor Lusavorich Church to celebrate the Ascension of Jesus Christ. After the Liturgy, the young members of the Armenian Youth Educational and Cultural Center of Akhaltsikhe entertained the gathered with their dances.

Mayoral candidate from “Georgian Dream” Party Giorgi Kopadze and Armenian and Georgian candidates for the city’s sacrebulo were also visiting the church.

During a meeting with the people, the mayoral candidate presented his political platform, which includes points related to healthcare, socio-economic and municipal development.

During the meeting, spiritual leader of Akhaltsikhe, Father Hakob Sahakyan began his speech by talking about the centuries-old Armenian-Georgian friendship, the importance of the strengthening and development of Georgian statehood and ended his speech with the demand for the need of a solution to the Armenians’ issues in Akhaltsikhe.

According to him, the Armenians of Akhaltskha have great expectations from the new authorities and, knowing Giorgi Kopadze, expect him to change many things for the better in the city. Father Hakob Sahakyan also said that if the candidates of the “Georgian Dream” Party win and make the same mistakes that their predecessors made, they will have the same fate that the previous authorities had and that the people won’t elect them again.

According to Father Hakob, Akhaltskha is the homeland of those who live there, regardless of national belonging, and it belongs to both the Georgians and the Armenians. Father Hakob added that the two nations will shape the city together and for that there shouldn’t be artificial barriers so that people can be involved in the activities of state institutions.

In the end, a child approached Giorgi Kopadze and said to him in the dialect of Akhaltskha “Gia dzyadza, haykakan mankapartez guzem” (Mr. Gia, I want an Armenian kindergarten), which the relatives of the child translated into Georgian for the mayoral candidate.

The meeting continued in the building for sacrificing where the Armenian clergymen presented the mayoral candidate and the MP candidates with the issues related to the “disputed” churches, as well as the issue of the Armenian chapels privatized by the Georgian Orthodox Church last year (it was mainly about the “Sister and Brother Chapels”).

Giorgi Kopadze assured the priests that the issue of the “disputed” churches would be solved through talks with the two Catholicoses and that all parties had to wait for the results of those negotiations.