Meeting at Armenian Youth Center of Akhaltsikhe ahead of elections 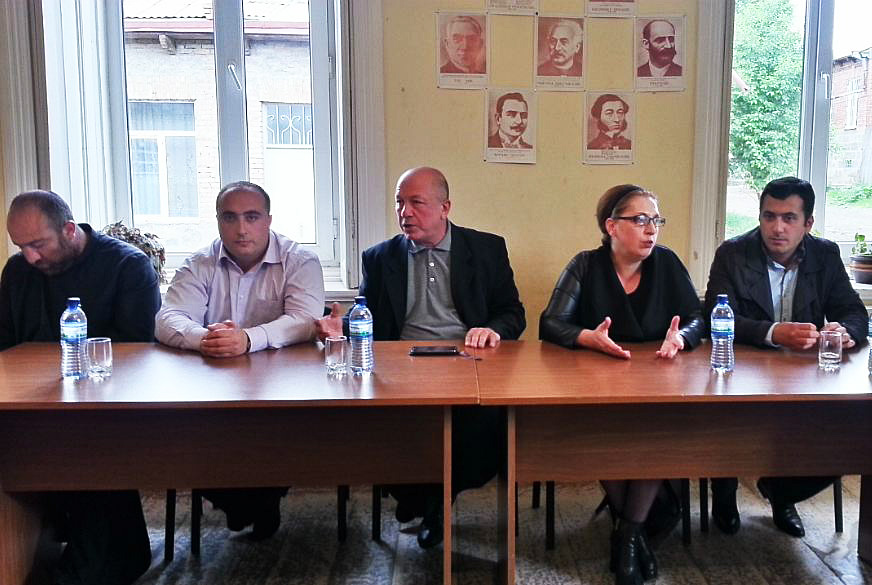 On May 22, Giorgi Kopadze, who is the candidate for mayor nominated by Georgia’s ruling “Georgian Dream” political party, as well as Armenian and Georgian candidates for Members of Parliament visited the Armenian Youth Educational and Cultural Center in Akhaltsikhe.

At the youth center, the candidates for mayor and Member of Parliament had a meeting with the local Armenians and presented their political platforms.

Candidate for mayor nominated by the “Georgian Dream” political party Georgi Kopadze said his party has several programs for the city’s prosperity and the modernization of infrastructures. According to him, for the first time in Akhaltsikhe, Armenians are represented as majoritarian MP candidates.

In his speech, Kopadze also informed the gathered that when he attended the commemorative events organized by the local Armenians on April 24th (Armenian Genocide Remembrance Day), he had a meeting with the city’s Armenian clergyman and promised that if elected, he would make sure the road leading to the local Armenian Church would be asphalted.

1. Refoundation of the  Armenian kindergarten in the building of the local Armenian school, which is very necessary for the Armenians of Akhaltsikhe,

2. Naming one of the streets of Akhaltsikhe after world famous singer Charles Aznavour on the occasion of Aznavour’s 90th birthday,

3. Naming one of the streets of Akhaltsikhe in honor of organizer of the self-defense of Akhaltsikhe, mayor Zori Zoryan in 1918 (the proposal was made by MP candidate Henrich Shekhposyan and was supported by the gathered),

4. Asphalting the road leading to the local Armenian Church,

5. Renovation of the road leading to the Armenian cemetery (the proposal was made by MP candidate Hambardzum Baboyan and was supported by the society).

According to mayoral candidate Giorgi Kopadze, if elected, he will do everything possible to support the refoundation of the Armenian kindergarten, and even though that concerns the Department of Education and Science, he will do his best to restore it.

As for naming one of the streets after Charles Aznavour, Kopadze said it was a good proposal and would be done. He also affirmed that he was aware of the self-defense of 1918 and Zory Zoryan’s role.

During the meeting, Ayvazyan also talked about the state of the Armenian language, the Armenian-Georgian friendship, as well as the need to participate in the elections.

During the meeting, the gathered also raised social, educational, health and other issues.

The meeting ended in a warm atmosphere, and all the interested parties were instilled with hope for the implementation of the promised programs.