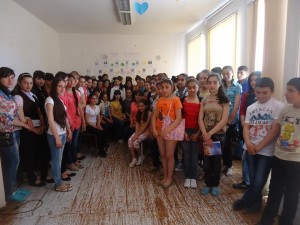 Schoolchildren of the Akhalkalak and Ninotsminda regions of Javakhk witnessed turning events on June 20th and 21st as they participated in the annual “Armenian History” and “Creative Essay” contests held upon the initiative of ARS Georgia. As in the past, the first contest was the “Armenian History” contest, which was held with the participation of nearly 80 students. Once again, the topic for the contest was “Our land is sacred, our water is Chrism, our people are brilliant, God is Almighty”. More and more schoolchildren participate in the contest and show more interest year after year. As a result, there is higher quality. From the angle of preservation of the Armenian identity, knowledge of Armenian history is important for the Armenians of Javakhk and all Armenians, for that matter. After many years, there have been certain changes in the contests.

The contest began with a welcome speech by Chairwoman of ARS Georgia Karine Tadevosyan, who encouraged the children to be more daring as they write an essay about a topic that is an important issue and represents the pain and sorrow of all Armenians. The event was attended by ARS members, philologists representing schoolchildren from different schools and concerned about their students, as well as many others. The title of this contest was unique and was dedicated to the Centennial of the Armenian Genocide. More than 100 schoolchildren participated in the contest entitled “Genocide Never Again!” and “Remember and Claim Reparation!”

The participants had traveled from nearly 20 villages of the two regions to participate in the contest with great pleasure. Since the creative essay contest left a great impact on the students, teachers and the gathered, the students recalled the cruel past of the Armenian nation and expressed their heartfelt words in their essays. Some even tried to raise their voices about their anger and their goals to achieve recognition of the Armenian Genocide.

Eleventh grade student of Ekhtila village, Anush Mkrtchyan tried to present the history of Armenians to the Turks not to have the Turks laugh at her, but to try to understand her and share the pain of the Armenians. Mkrtchyan has been participating in the contest for two years. Another participant tried to be different and didn’t talk to the Turks with hostility, but simply tried to explain what had happened in order to make positive changes.

All the participants wrote about a topic that represents the pain of all Armenians. They were after one thing, and that was to make their contribution to recognition of the Armenian Genocide by showing their knowledge of the tragic past of the Armenians in an essay.