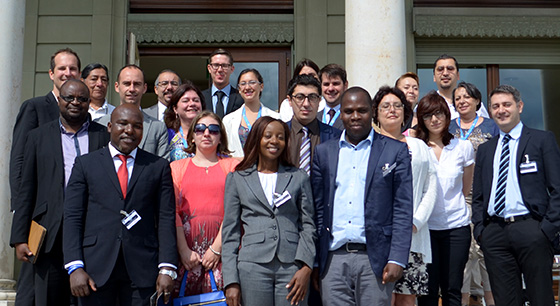 On July 7-14, 2014, Mr. Levon Isakhanyan, on behalf of the Apostolic Administration of Roman Catholic of South Caucasus, the Diocese of the Armenian Apostolic Orthodox Holy Church in Georgia, the Evangelical Lutheran Church in Georgia, and the Evangelical Baptist Churches in Georgia, participated in a UN Human Rights Committee session in Geneva, Switzerland. At its 111th Session, the Committee considered a report on the implementation of the International Covenant on Civil and Political Rights in Georgia, which is available on the Committee’s website http://tbinternet.ohchr.org/_layouts/treatybodyexternal/Download.aspx?symbolno=CCPR%2fC%2fGEO%2f4⟪=en). Mr. Isakhanyan also presented information concerning religious minorities in Georgia and talked about documented cases of discrimination missing from the Georgian State Report (click to watch the video http://www.youtube.com/watch?v=rJW-zresXLU&list=UUnYQ_RWaAObGP4VrKu_BLVQ).
An alternative detailed report on discrimination against religious minorities in Georgia (available on the Committee’s website http://tbinternet.ohchr.org/Treaties/CCPR/Shared%20Documents/GEO/INT_CCPR_CSS_GEO_17551_E.pdf) and a letter signed by four religious leaders representing the Diocese of the Armenian Apostolic, the Roman Catholic, the Evangelical Lutheran, and the Evangelical Baptist Churches in Georgia addressed to the Chairperson of the Committee (available on the Committee’s website http://tbinternet.ohchr.org/Treaties/CCPR/Shared%20Documents/GEO/INT_CCPR_CSS_GEO_17553_E.pdf) were brought to the Commissioners’ attention.
The Members of the Committee expressed their concern about the presented cases of discrimination. Mr. Yadh Ben Achour, Vice-Chairperson of the Committee, noted that Georgia might have not complied with its obligations to eradicate discrimination against religious minorities (click to watch the video http://www.youtube.com/watch?v=WDTK-9VJlcI&list=UUnYQ_RWaAObGP4VrKu_BLVQ). Mr. Ben Achour posed a number of questions to the Georgian delegation chaired by Ms. Thea Tsulukiani, the Minister of Justice of Georgia, about:
- Measures taken for restitution of property confiscated from religious minorities during the Soviet regime;
- State assistance to the Georgian Orthodox Church (GOC) in undertaking de-facto expropriation of minority religions’ property;
- Discrimination of religious minorities in the field of taxation;
- Harassment and assault of persons belonging to religious minorities as well as passive behavior of the Government in regard to these facts;
- Whether the Constitutional Agreement, or Concordat, between the Georgian State and the Orthodox Church is the source of discrimination against religious minorities in Georgia;
- Unequal budgetary allocations for religious organizations;
- Unequal allocation of public funds for maintenance of places of worship;
- Outcome of criminal investigations in regard to crimes committed on the basis of religious intolerance.
Ms. Tinatin Khidasheli, an MP from the ruling coalition, addressed the question concerning the Constitutional Agreement by stating the following: “I can tell you with full responsibility, being at that time one of the authors of this Concordat, that there is no provision anybody in the world can cite in this Concordat, which is meant for discrimination of the others or which is giving any privileges to the Orthodox Church. It just defines the two things. One: division of the State and Church. In those early ages of our democracy that was very crucial and important, especially keeping in mind historical role of the Orthodox Church, having a clear line dividing State and Church from each other. And two: it is about the non-interference of either parties in their affairs. These are two main reasons or two main lines in the Concordat and it never talks about any other religious groups in the country, it never discriminates anybody against, it never says any word about its privileges towards the others. That is on the one side of it. The other parts, and I believe that the other members of the delegation will talk about it even more in details, about the changes in policy of the current Government towards the religious minorities and equalizing them both in financial and legal terms to the Orthodox Church of Georgia” (click to watch the video http://www.youtube.com/watch?v=02k-5Tbvmyk&list=UUnYQ_RWaAObGP4VrKu_BLVQ).
The Diocese of the Armenian Apostolic, the Roman Catholic, the Evangelical Lutheran, and the Evangelical Baptist Churches in Georgia welcome the Georgian authorities’ intention to reconsider the State policies in regard to religious minorities and to “equalize them both in financial and legal terms to the Orthodox Church of Georgia”. Notably, according to Paragraph 1, Article 7 of the 2002 Constitutional Agreement, “[t]he State shall recognize Orthodox churches, monasteries (acting and non-acting), church remains and land premises they are built on all over Georgia to be property of [the Georgian Orthodox] Church”. Based on this provision, the GOC managed to return its property confiscated during the Soviet regime, while the religious minorities in the country lack legal framework for restitution of their confiscated property. Hence, according to the Constitutional Agreement, the State conferred special rights to the GOC that do not apply to the religious minorities. In order to efficiently address discrimination, equal rights must be guaranteed to all the religious denominations under the Georgian jurisdiction.
In his response, a representative of the State Ministry on Reconciliation and Civil Equality referred to the State’s achievements concerning restitution of property belonging to religious organizations, issues related to legal status of religious organizations, partial reparations for loses caused during the Soviet period, and the creation of the State Agency for Religious Issues (click to watch the video http://www.youtube.com/watch?v=ncu7VqbcDs8&list=UUnYQ_RWaAObGP4VrKu_BLVQ).