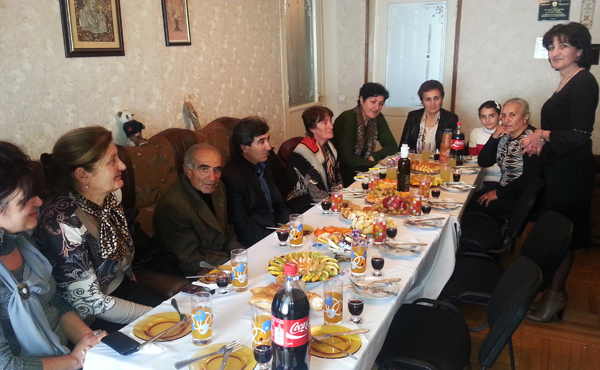 On 10 November, the Armenian Relief Society of Georgia paid homage to the teachers of the Samtskhe-Javakheti region that have been recognized as the best. Among the participants of the event were teachers from Akhaltskha, Akhalkalak and Ninotsminda.

During a small reception, Chairwoman of ARS Georgia Karine Tadevosyan greeted all the teachers and expressed her words of gratitude to them all. According to Tadevosyan, it’s very important for teachers at Armenian schools teach the subjects in Armenian and help Armenian children learn the native language and Armenian history. Tadevosyan added that it’s also important to educate the children in a way that they always preserve national values.

During the event, some members of the Youth Center of Akhalkalak visited the ARS Office in Georgia, paid homage to and recited poems dedicated to teachers, after which they gave roses to all the teachers attending the event.

In the end, Karine Tadevosyan read the congratulatory message of RA Minister of Education and Science Armen Ashotyan and the minister’s decree by which he had granted diplomas and certificates of appreciation to the teachers who were recognized as the best of the Samtskhe-Javakheti region this year.

In their turn, the teachers expressed gratitude to the Armenian Relief Society of Georgia for the nice and very important initiative and asked the ARS to convey their words of gratitude to the RA Minister of Education and Science.
Popular