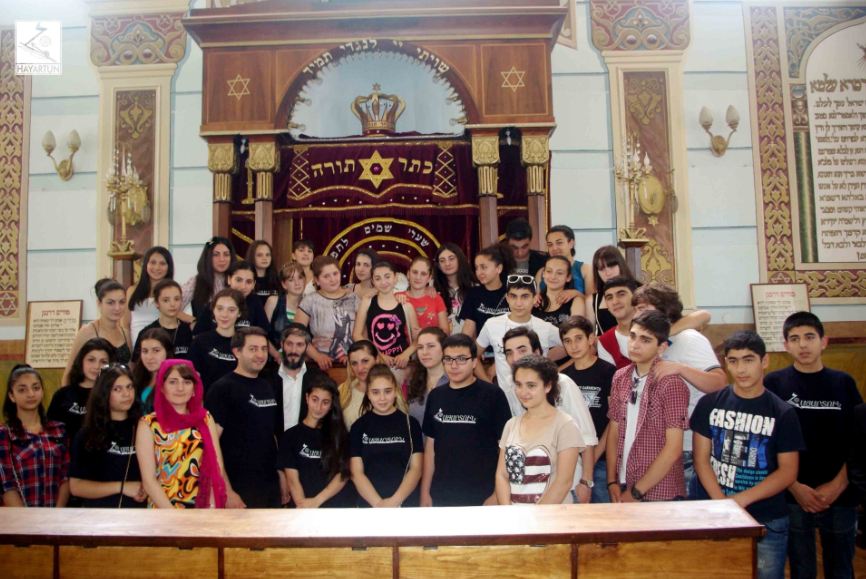 On 14 June, 2013 the "Hayartun” Cultural Center of the Diocese of the Armenian Apostolic Church in Georgia organized the visit of young representatives of the Armenian community in Georgia to the Synagogue and the Mosque in Tbilisi. The aim of the visit was to familiarize young Armenians of Georgia with the history and traditions of the monotheistic religions like Judaism and Islam. The spiritual principal of the "Hayartun” Cultural Center Deacon Gevorg Antonyan, the Adviser to the Head of the Diocese Levon Isakhanyan and the Head of the "Hayartun" Cultural Center Technical Department Valera Badalyan accompanied the youth.

The Rabbi of Georgian Jewish Community Avimelekh Rosenblatt welcomed the Armenian youth at the Synagogue; he presented the Synagogue architecture and interior design, which was followed by a conversation about the religion, traditions and customs of the Jewish people.

In the afternoon the young representatives of the Armenian community visited the Mosque, where they met Sheikh of All Georgia Vagif Akperov. Sheikh Vagif presented the history and traditions of the Shia Muslims, the history of the Islamic community in Tbilisi, as well as architecture and interior of the Mosque.