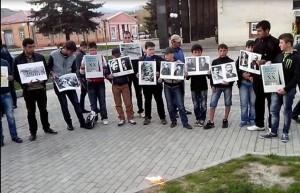 On the eve of Apr. 24, a group of Armenian youth gathered at the central park in Akhaltskha and remembered the victims of the Armenian Genocide with pictures of the intellectuals who were killed in Constantinople on April 24, 1915.