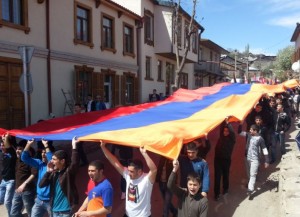 At midday, people from the villages also gathered in the patio of the church and started the march, passing through the major streets of the city. During the march, people called for claims in Armenian and Georgian with several signs and the national flags of Armenia and Georgia.

The people went up to Marda District where there was a cross-stone placed in memory of the victims of the Armenian Genocide at the peak.

The youth of the only Armenian Damala village of Aspindza region joined the citizens of Akhaltskha with their cars near the cross-stone.

The priests performed a Requiem Mass, prayed with the people and respected the memory of the millions of Armenian victims of the Genocide with a moment of silence.

Spiritual leader of Akhaltskha, Father Hakop Sahakyan mentioned that just like Christ rose from the dead, the Armenians have also risen after being subject to Genocide and have become strong with the claim for restoration of justice and reparations.

After the priest’s speech, the teachers and students of the Armenian Youth Center of Akhaltskha gave speeches condemning the Armenian Genocide of 1915 and stated their claims.