Another Session of the Georgian Committee 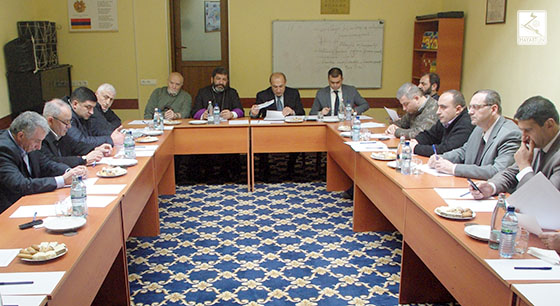 On March 2, 2015, another wide session of the Georgian regional committee on the organization of the events regarding the 100th Anniversary of the Armenian Genocide was held at the “Hayartun” center of the Armenian Diocese in Georgia, with the participation of the Ambassador Extraordinary and Plenipotentiary, Mr. Yuri Vardanyan.

The Primate of the Armenian Diocese in Georgia, His Grace Bishop Vazgen Mirzakhanyan, is also the president of the committee. On behalf of all committee members, he congratulated the ambassador and all embassy stuff on Diplomat’s Day.

They discussed the events planned in the motherland and in Georgia in April, things to do, the issue of supplying with necessary equipment in Tbilisi and regions for the events to be organized on April 23rd and 24th.

The president of the committee presented a detailed schedule of the ecumenical prayers, commemorative evenings and cross-stone consecrations in memory of the Armenian genocide victims to be held in Georgian and other churches.

The commemorative evening in Petros Adamian Tbilisi State Armenian Drama Theatre, showing of documentaries about the Armenian Genocide in the regions, the lighting of candles in memory of intelligentsia – victims of the "Great Crime", the special edition of the Vrastan (“Georgia”) Newspaper dedicated to the 100th Anniversary of the Armenian Genocide in Georgian and Armenian: these were the activities listed among the ones planned to be undertaken. The committee suggested organizing a tree planting of 100 tree seedlings in Tbilisi Khojivanq pantheon of notable Armenian writers, artists and public figures.

The core principals of the events dedicated to the 100th Anniversary of the Armenian Genocide will be the following:

Debt we owe to martyrs;

Revival of the Motherland’s, Artsakh’s and pan Armenian achievements.

The revised schedule of the events to be held in Tbilisi and regions will be placed on the web.

The Ambassador Extraordinary and Plenipotentiary, Mr. Yuri Vardanyan, concluded the session by highlighting the importance of the full-scale and comprehensive conduction of commemorative events.

The next session of the committee will be held on March 23rd in Javakheti.
Popular