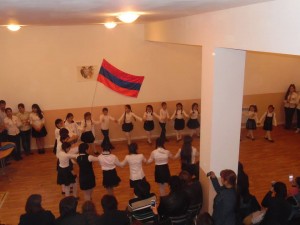 It was the 28th of May 1918 when Armenia gained its independence and was declared as the First Republic of Armenia. After the persecutions, massacres and wars orchestrated by the Young Turks’ government, the tortured Armenian people were barely trying to get back on their feet and find peace in their native land. They were fighting to restore justice and gain independence. And finally, after the heroic battles of Bash-Aparan, Gharakilisa and Sardarapat, the centuries-old dream of creating an autonomous state came true for the Armenian people.

Despite its short existence (1918-20), the First Republic of Armenia played a major and invaluable role in the future reinstatement of statehood.

Today, Armenia is independent once again and is celebrating the 98th anniversary of its independence along with all Armenians around the world.

The youth center of Akhalkalak also celebrated Republic Day with an event attended by the personnel of the youth center, as well as the students and their parents. According to tradition, the event was held properly and set the festive mood.

The students’ poems, songs and dances devoted to Armenia and independence put smiles on people’s faces and made them feel wonderful.

Everyone was happy and proud to have an Independent Armenia and to be Armenian in general.